For our next #RetroLive match, we rewind to April 18, 2008, when Kolkata Knight Riders and Royal Challengers Bangalore kicked off the IPLBig PictureAfter months of hype, excitement, controversy and speculation the high-profile Indian Premier League kicks off in Bangalore with the Royal Challengers hosting the Kolkata Knight Riders. “Eight teams, without any players, only warriors” is the maxim for the inaugural tournament and there’s plenty riding on it. Fans from all around the world will zoom in to see players who have squared off on the international level come together to try and trump others, and many, not least the organisers who have gone to town promoting the event, will follow with bated breath. Not since Kerry Packer’s World Series Cricket has an event so divided and stirred up the fraternity. It might be too much for a traditionalist but against the backdrop of a cricket-crazy host country, and with plenty of huge names involved, there’s little going against the lucrative tournament.Watch out for…After the Chinnaswamy Stadium is plunged in darkness, a spotlight will focus on the rival captains, Sourav Ganguly and Rahul Dravid. The duo has been solid for India for over well over a decade and would’ve played against each other on the domestic front but this is something completely new.Dravid and Jacques Kallis are champions for their respective countries, one recently going past 10,000 Test runs and the other soon to get there, but they’ve done little of note in Twenty20 cricket. Kallis was unceremoniously axed from the ICC World Twenty20 at home and has only played seven matches; Dravid has played only two domestic matches. Pitted together in the same team, its going to be interesting to see how they adapt.Just 21 years and six first-class games old, young Debabrata Das could be forgiven for being a bit overawed around some of his acclaimed Kolkata team-mates. But with Pakistan’s Salman Butt on international duty, Das finds himself on the verge of playing in the big opener. He’s up against fellow Bengal batsman Wriddhiman Saha, but being a wicketkeeper may go against Saha given that Kolkata have Brendon McCullum. It’s a great opportunity to impress.Not many in India would’ve followed Ashley Noffke’s career. Ushered in for Bangalore as cover for fellow Australian Nathan Bracken, he can be expected to play the first game. Noffke, 30, has played one ODI and two Twenty20s for Australia, and apart from his skills with the ball he is also a capable lower-order batsman, with two first-class centuries.Team newsWith only four overseas player allowed in a team, its unlikely that Shivnarine Chanderpaul and Cameron White will both play and White’s excellent Twenty20 record puts him ahead. With Anil Kumble ruled out through injury, White is also placed to take the lone spinner’s slot ahead of local lad KP Appanna. Kallis and Mark Boucher were expected to leave for the South African domestic Twenty20 competition but will now stay back but with Dale Steyn absent, Noffke could easily fill in. Misbah-ul-Haq will miss the opening clash because of the ongoing series in Pakistan and Chanderpaul is reportedly carrying an injury so another of the local boys, B Akhil or Bharat Chipli, could come into the middle order.Royal Challengers Bangalore (likely) 1 Praveen Kumar, 2 Wasim Jaffer, 3 Jacques Kallis, 4 Rahul Dravid (capt), 5 Virat Kohli, 6 Cameron White, 7 B Akhil, 8 Mark Boucher (wk), 9 Zaheer Khan, 10 Ashley Noffke, 11 R Vinay KumarKolkata are without Butt and Umar Gul, in Bangladesh, and that opens up slots for young Das and Ashok Dinda, the Bengal medium pacer. Ganguly has said he will open, which means the explosive McCullum would come in after Ricky Ponting at No. 3. David Hussey and an in-form Laxmi Ratan Shukla strengthen the middle order. Shukla will assist Ishant Sharma and Ajit Agarkar and Murali Kartik – with Twenty20 experience in England – adds variety with his left-arm spin and handy lower-order batting. Chris Gayle has yet to arrive for the match and so his place in some doubt.Kolkata Knight Riders (likely) 1 Chris Gayle, 2 Sourav Ganguly (capt), 3 Ricky Ponting, 4 Brendon McCullum (wk), 5 David Hussey, 6 Debabrata Das, 7 Laxmi Ratan Shukla, 8 Ajit Agarkar, 9 Murali Kartik, 10 Ishant Sharma, 11 Ashok Dinda.Stats and triviaWhite has a record 55-ball Twenty20 century on the English county circuit and with a batting average of 43.90 in this format he’s clearly one to watch. He has hit 62 fours and 49 sixes in 546 balls faced in Twenty20 cricket – that’s a four or a six every 4.92 balls.The last time Gayle played in the first match of a Twenty20 tournament, he blasted a 57-ball 117 v South Africa in the World Cup; the 10 sixes he struck is the highest in a Twenty20 innings.In 21 overs that Kartik has bowled in Twenty20 games, he has only gone at 5.90 per over, taking nine wickets at 13.77.Quotes”The opening ceremony is expected to only be a short function. I don’t think it will affect the game that follows. Kolkata has a good side and we are prepared with strategies for them.”nRCB captain Rahul Dravid”There is no clear favourite in the shortest version of the game. Difference between teams lessens in the T20 format as the contest is too short. I consider this event as a contest between state sides with world-class players.”nKKR captain Sourav Ganguly”Sourav is a very cool-headed captain. He is very experienced. We expect him to lead from the front.”nKKR coach John Buchanann 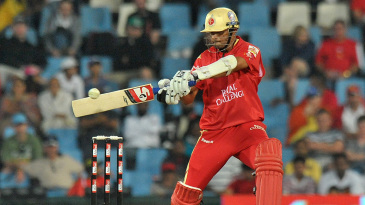