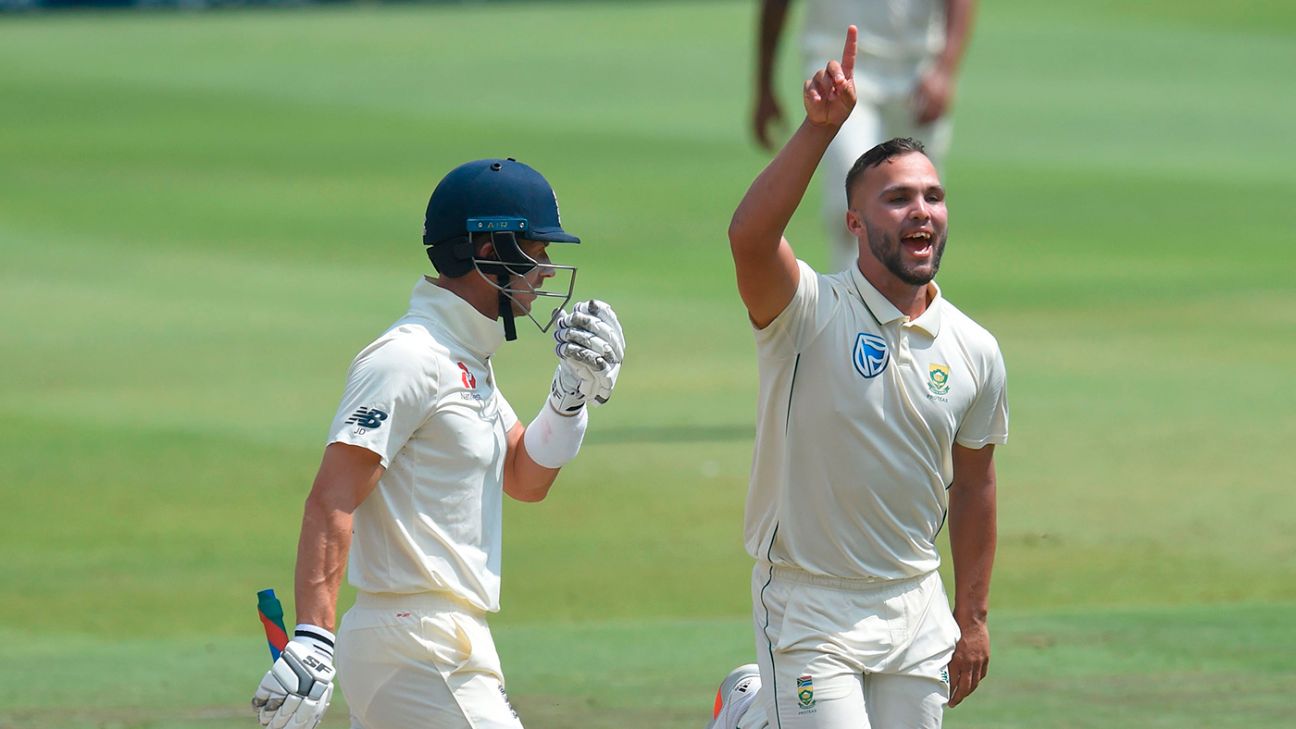 Dane Paterson, the seamer who made his Test debut for South Africa in the 2019-20 summer, has ended his career in his home country and intends to play professionally in England from this season.Paterson could be left in limbo, however, after an interview to confirm his Kolpak deal with Nottinghamshire, scheduled for March 23, was postponed by the COVID-19 pandemic, amid great uncertainty around the fate of the English summer.ALSO READ: PCA backs move to two overseas players as Brexit pushes Kolpak window shutWhen Kolpak deals become invalid, which is due to happen when the UK leaves the European Union on December 31, Paterson will continue playing in England as an overseas professional, although it is unclear if counties will still be able to accommodate foreign players. Despite the uncertainty over the start of the cricket season in the UK, Paterson has not been re-contracted to his local domestic franchise, the Cobras.Paterson’s decision caught Cricket South Africa off guard, especially given that acting director of cricket Graeme Smith had been in communication with the ECB and the CEO of the Cobras’ franchise, Nabeal Dien, while Paterson was weighing up his options.Paterson was approached by Notts in late February, at which point Dien took the news to Smith, who made contact with ECB chief Tom Harrison. Upon learning that Kolpak deals will cease to exist at the end of 2020, Smith relayed the information to Dien and was then informed Paterson had changed his mind and would remain in South Africa.ALSO READ: England players volunteer salary reduction amid season uncertaintySince then, however, Paterson has had another rethink and decided to pursue his opportunity in England, forcing Smith to remove Paterson from South Africa’s winter training squad. “It surprises me that he made that decision, given all the information he had,” Smith said.However, Ashwell Prince, Paterson’s coach at the Cobras, was sympathetic to the choice his former player had made.”When a player gets to over 30, especially as a bowler, they don’t have that many years left in you,” Prince said. “I’m sure these guys sit down and calculate what realistic opportunities will they have of playing for the Proteas and if not, they will consider other options. I think this is probably how this came about.”Paterson debuted at Port Elizabeth in January and played in two of the four Tests against England this summer. However, he was overlooked for the one-day leg of the summer against England and Australia, despite already having four ODI and eight T20 caps, a fact which Prince believes may also have forced his hand.”It is disappointing but the player is also asking themselves, ‘if I just played for the Proteas a few weeks ago, why am I not in any one-day squads, any T20 squads?’. He might be thinking maybe he only played in that Test because so many guys were injured. KG [Rabada] was suspended, [Lungi] Ngidi was unfit or injured and then the one-day squads come out, the T20 squads come out and he didn’t feature in any of them.”South Africa endured a torrid home season, losing the Test series 1-3 to England and winning only one out of the five series they played, an ODI rubber against Australia. While their Test campaign was blighted by the absence of Ngidi, who was sidelined with a hamstring injury, and Rabada’s suspension, their limited-overs squads were experimental as they sought to cast the selection net widely.Smith explained that the team management is in the process of working through long-term plans for players, including Paterson, who was among the 40 players earmarked for intense training camps. Although those sessions have yet to get underway, with the country currently on the 11th day of a 21-day lockdown, Paterson will no longer be part of them.Paterson is the fourth player to attempt to take up a Kolpak deal ahead of the 2020 summer. Hashim Amla and Vernon Philander, who have both retired from international cricket, were due to begin deals with Surrey and Somerset respectively while Farhaan Behardien ended his Titans’ career and signed with Durham.Dwaine Pretorius would have been the fifth after he, like Paterson, was courted by Nottinghamshire but Pretorius did not follow through with the deal after discussions with CSA. Pretorius also made his Test debut in the series against England and has since been awarded a national contract.An insider told ESPNcricinfo that Pretorius had not been guaranteed game-time or a central contract as an incentive to stay in South Africa but was provided with reassurance that he was in the selectors’ plans across all three formats. The same cannot be said of Paterson, who was only considered for Tests this summer and who the same source believes “still has quite a lot of work to do on his own game”.